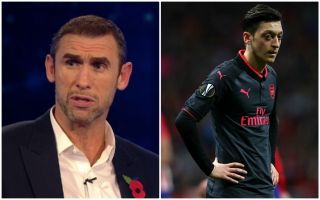 As seen in the video below, the BT Sport pundit didn’t hold back as he singled out the German international for his performance against Atletico Madrid in Spain and it’s a common theme that has gone on this season.

On one hand, he does often make a valid point. Given the crucial role that Ozil has in this Arsenal side, much more is expected, and needed, from him given his quality and experience of delivering at the highest level.

However, it could also be argued that it’s slightly unfair to make him the scapegoat when Arsenal are often simply not good enough across the board, as reflected in their Premier League position this season.

It seems as though Keown has blasted him one too many times though as Ozil’s agent, Dr Erkut Sogul, has slammed him over his latest comments and has opted to get personal with the former centre-back too.

“I think that Martin Keown feels that just because he used to play football, it gives him the right to attack the current generation of stars,” he is quoted as saying by The Sun. “Perhaps he just wants to remain relevant, or maybe it is due to jealousy?

Sogul also questioned Keown’s standing at Arsenal and labelled him a “reserve” for a large period of his career with the Gunners which seems a bit of a low blow.

Nevertheless, he’s merely standing up for his client as he doesn’t want the ex-Arsenal man to influence the opinion of the fans on Ozil, who will hope to play a key role for the new manager next season with Arsene Wenger set to step down this summer.