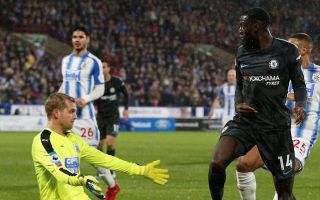 Chelsea are on course to miss out on Champions League football after a disappointing performance vs Huddersfield this evening.

Chelsea were held to a 1-1 draw at home to Huddersfield this evening and Antonio Conte’s side need a miracle to secure Champions League qualification.

Despite introducing both Oliveir Giroud and Eden Hazard from the bench in the second-half, Chelsea were unable to carve out a winner this evening at Stamford Bridge.

Huddersfield took the lead through Laurent Depoitre on the 50th minute and despite a Chelsea equaliser through Macros Alonso just twelve minutes later, the Blues were unable to find a winner in the remaining 30 minutes at Stamford Bridge.

Hueddersfield were given little chance at the start of the season to remain in the Premier League but David Wagner’s side have achieved their most important goal with a game to spare.

The art of defending is still alive and kicking in the prem, big well done to Huddersfield Town ?? old school defending ? player’s physically throwing body’s in the way to grind out a result

A home win against Manchester United, a draw away to Manchester City and tonight’s heroics at Stamford Bridge are standout moments in a superb season for the newly-promoted side.

Chelsea now trail two points to Liverpool and Jurgen Klopp who sit in fourth place. Given Chelsea’s significantly weaker goal difference they will need a miracle this weekend which will involve Liverpool losing to Brighton at Anfield in order to secure Champions League football.

A poor season an even poorer 90 minutes for Alvaro Morata. Morata was purchased by Chelsea for £58m last summer but has struggled all season to win over supporters following a tricky debut season in London. (Fee per the Telegraph)

Tonight’s fixture saw Morata squander a good chance in the first-half and in the past few months he has slipped down the pecking order behind Olivier Giroud. Morata has scored just eleven goals in 30 Premier League games this season.