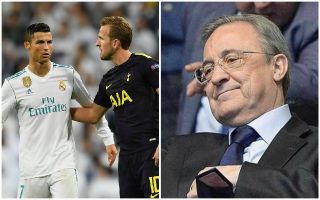 Manchester United remain interested in sealing the transfer of Tottenham striker Harry Kane as Real Madrid have cooled their interest, according to reports in Spain.

The Daily Mail have previously linked Kane as a top target for Madrid this summer, valuing him at around £200million after his remarkable rise to become one of the world’s top centre-forwards in recent years.

However, Don Balon now report that United and PSG could be more likely suitors for the England international as Real are both put off the player’s asking price and unsure whether or not to sign a ‘number 9’ this summer at all.

Don Balon’s report mentions Cristiano Ronaldo isn’t keen on the idea, so that could be good news for United as they could do with strengthening in attack.

Romelu Lukaku perhaps hasn’t lived up to expectations this season despite a decent return of 27 goals in 50 games in all competitions.

A signing like Kane would be another real statement by a club that has chased the big names since the retirement of legendary manager Sir Alex Ferguson in 2013.

While it is yet to truly pay off, an elite goal-scorer like Kane, who has 39 goals in 47 appearances for Spurs this season, would surely turn Jose Mourinho’s side into serious contenders.

Don Balon does mention, however, that with Tottenham wrapping up Champions League football last night, the 24-year-old may no longer be desperate for a move away from north London anyway.