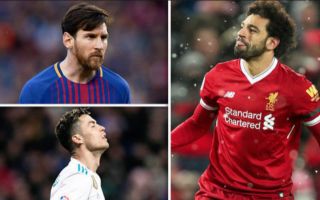 The race for the European Golden Shoe is hotting up, and this year Mohamed Salah is challenging the status quo.

All of the last eight European Golden Shoes have been won by the same three players: Lionel Messi, Cristiano Ronaldo and Luis Suarez.

Is Mohamed Salah set to win the European Golden Shoe?

Salah was on course to win the Golden Shoe, however, the Liverpool forward hasn’t scored in his last two league outings, meaning Lionel Messi has overtaken the Egyptian star.

This, partly, can be attributed to the excursions felt from Liverpool’s remarkable Champions League campaign – where Salah has played a crucial role – scoring 10 goals.

This season, he has scored 34 La Liga goals as Barca close in on a historic unbeaten season.

Messi has scored five in his last three games.

A hat-trick for Salah on Sunday against Brighton would give him the chance of sharing the award with Messi – however – the Argentine has a game more to play, meaning he has a more probable chance of winning.

Robert Lewandowski and Ciro Immobile are behind them with 29 goals.