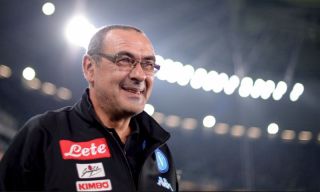 Napoli president Aurelio De Laurentiis has revealed that he will sit down with coach Maurizio Sarri next week to discuss the future amid Chelsea links.

The 59-year-old has done an impressive job at the San Paolo over the past three years, not only keeping them in the Champions League but pushing Juventus at the top of the table while implementing an entertaining style of play.

That has led to plenty of praise for the Italian tactician, as he has undoubtedly transformed Napoli into one of the most watchable teams in Europe with their expansive, attacking play and high pressing.

However, while he has fallen short again of winning major trophies, his name has been linked with replacing Antonio Conte at Chelsea, as reported by the Evening Standard, and so the meeting with De Laurentiis next week could be decisive in determining his future.

“We are planning a meeting with the coach next week, but I’m calm and serene,” he is quoted as saying by Gianluca Di Marzio. “He’s achieved great results here, which is why I hope he remains.

“He came from Serie C, then he coached Empoli and I believe that these three years with us have also been useful for him to make an important leap in quality.”

Provided that the building blocks are put in place and guarantees are made that Napoli will strengthen to try and dethrone Juventus again next season, it would come as no surprise if Sarri remained with the Partenopei.

Nevertheless, testing himself in the Premier League will surely be an attractive proposal too if Chelsea are indeed ready to make him an offer, but it remains to be seen what comes out of this scheduled meeting as De Laurentiis sounds keen on keeping the Naples-native where he is.