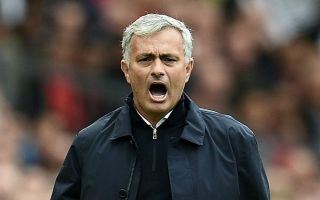 The Red Devils are in action at the London Stadium with a much-changed side from the one that lost 1-0 to Brighton last week.

Mourinho has made eight changes in total, and also seems to be trying a somewhat experimental 5-3-2 system with Alexis Sanchez and Jesse Lingard paired together as makeshift strikers.

However, despite Shaw starting at left wing-back, it seems Mourinho isn’t happy with him going too far forward.

Luke Shaw's positive intent with having a shot at goal results in Mourinho racing to the touchline and giving him a rollocking. Didn't want to him to go that far forward. #mufc

This attitude seems to typify the Portuguese’s conservative approach to games and harsh treatment of players who don’t perfectly align with his mentality.

It’s fair to say United fans aren’t too happy with what they’re seeing tonight, with the score tied 0-0 at half time.

And with Mourinho finding an excuse to yet again attack Shaw for his performance, it’s clear the supporters are firmly siding with the player over the manager on this one…

This Mourinho agenda against Shaw is why we don't understand football…. https://t.co/HspZ2LGY97

Shaw has been ace tonight, defensively and at moving the ball forward. Mourinho doesn't seem to agree. https://t.co/yPCaffVR3z

Luke Shaw getting ridiculed left and right by Mourinho for no valid reason. A man with pride would've chokeslammed him on the pitch a long time ago.

Enjoyed Shaw’s performance so far but I hear Mourinho berated him for getting too far forward. ???

In shaw’s last game Mourinho critised him for not attacking enough and now he’s attacking Mourinho is giving him a rollicking? he 100% has an agenda against him.

If Luke Shaw is criticised by Mourinho, he needs to leave for his own good. Thought he was our best player in the first forty-five.

It’s much better watching him in defence, rather than a knackered Ashley Young.

Mourinho is such a prick. What is his agenda against Luke Shaw? He’s been our best player ffs

Luke Shaw makes a great challenge then comes away with the ball, I’m sure Mourinho will still be telling him why that was the wrong decision