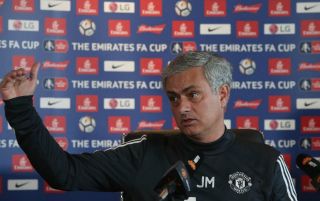 Manchester United manager Jose Mourinho has given a big clue about two players he plans to start in the FA Cup final against Chelsea.

Speaking after today’s 0-0 draw with West Ham, the Portuguese tactician was understandably asked about what looked on the face of it to be a strange tactical decision at the London Stadium.

MORE: Stat confirms Manchester United are the most boring team in the league since Sir Alex Ferguson retired

United started with Alexis Sanchez and Jesse Lingard up front and it’s fair to say the two attacking midfielders didn’t slot in perfectly in that position.

United fans tweeted during the game that they missed Romelu Lukaku, who was absent through injury, but Martial and Rashford could also have filled in up front.

However, both started the game on the bench, with Mourinho commenting afterwards that they would be back in the team this weekend to warm them up for the FA Cup final as otherwise it would be too much rest for them.

Mou on no strikers: "For the ones who will play the cup final, resting for two weeks is not the best preparation. Sunday is again for Martial and Rashford." #MUFC

‘For the ones who will play the cup final, resting for two weeks is not the best preparation,’ Mourinho was quoted by Kris Voakes.

‘Sunday is again for Martial and Rashford.’

United take on Chelsea at Wembley after the end of the league season in what is their only chance to end the season with some silverware.

United wrapped up second in the Premier League this evening but that won’t go down as a huge success if there isn’t also a trophy to show for their consistency throughout this campaign.

Red Devils fans will likely be pleased at this indication that two young, dangerous attacking players are in the manager’s plans for the cup final as they haven’t always been regulars throughout 2017/18.