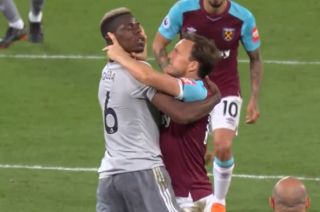 In an otherwise dull 0-0 draw at the London Stadium, there was something of a flash point late on as these two clashed in a nasty incident on the pitch.

MORE: Manchester United fans are all agreed on the player they are ‘shocking to watch’ without

Noble for some reason went for Pogba’s face with an attack that many on Twitter pointed out looked like he was trying to tear the Frenchman’s eyes out.

It certainly has no place on a football pitch and it’s truly bizarre the referee only decided to dish out a booking to the Hammers ace when he obviously saw it fit to respond to the incident.

One imagines there’s a chance of a harsher punishment being given retrospectively, but referees at this level cannot be allowing players to get away with such acts of violence and aggression.

Many United fans and indeed neutrals took to Twitter to express their disbelief in what was pretty much the only talking point from today’s drab end-of-season affair between two sides with little to play for.

How has Mark Noble not been sent off? Disgraceful.

Mark a noble has just taken a swing at POGBA @FA ? Can you act as quickly and decisively as you do when Jose kicks a water bottle on the touch line. pic.twitter.com/pp87c3R6fd

This Noble Pogba incident is a prime example of how poor EPL officiating is. It’s a circus mate

Noble what a shithouse ? hows that not a red

How was that not a red card? Absolute bell end #noble