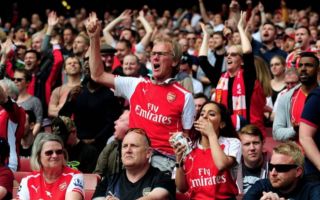 As he celebrated lifting yet another trophy at Juventus, Massimiliano Allegri saw his Twitter feed taken over by Arsenal fans desperately hoping he arrives in north London this summer.

The Italian tactician made it four straight Coppa Italia triumphs as he saw his players brush AC Milan aside in a 4-0 win in the Coppa Italia final in Rome on Wednesday night.

Juve have all-but sealed their fourth consecutive Serie A title under Allegri too, as they boast a six-point lead over Napoli with two games remaining and a far superior goal difference with the head-to-head tied.

In turn, it’s fair to say that Allegri has enjoyed quite the stint in Turin, as he has proven over and over again that he is one of the top coaches in Europe.

However, on the flip side of that, it could be argued that he now has nothing else to prove or challenge himself with at Juventus.

Having fallen short in the Champions League final twice, that’s ultimately the last hurdle that he is yet to overcome. Considering he’s lost the likes of Andrea Pirlo, Arturo Vidal and Paul Pogba during his tenure, it’s debatable as to whether they’re moving further away from European success.

As a result, as seen in the endless tweets below, Arsenal fans are desperate for him to test himself in a new job and are willing him to become Arsene Wenger’s successor, with The Telegraph noting that he is on the shortlist.

The veteran tactician will step down at the end of the season after 22 years in charge of the Gunners, and based on these comments, it seems that many Arsenal fans are convinced that Allegri is the right man for the job.

Given his experience at the highest level and his track record of winning without ever really demanding or receiving marquee signings, it could be a perfect fit. Perhaps a little more pragmatic in his style of play than Wenger, it has delivered impressive results and so it remains to be seen if he gives these fans what they are seemingly demanding.

MASSIMILIANO ALLEGRI WE ARE WAITING FOR YOU AT THE CARPET, AHHH I CANT WAIT FATHER ALLEGRI.

Come to arsenal, there’s nothing to achieve at Juve again, we need you at arsenal

Come and save my club @Arsenal plxxx???