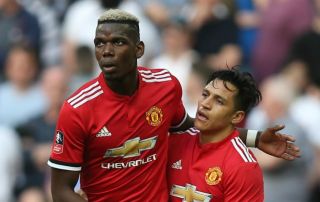 Jose Mourinho was critical of his players that lost against Brighton – and he has made eight changes tonight.

Marcus Rashford and Anthony Martial drop to the bench and Jesse Lingard starts.

Manchester United striker Romelu Lukaku will miss the club’s last two league matches with an ankle injury but could return for the FA Cup final.

Alexis Sanchez also didn’t play against Brighton as he was carrying a slight knock but the Chilean starts to face David Moyes’ side.

Marouane Fellaini is also absent due to a muscular injury but Phil Jones returns to the side.

Marko Arnautovic will be fit after he was replaced as a precautionary measure during the win at Leicester.

Arnautovic has scored 10 league goals this season. Bobby Zamora was the last West Ham player to score 11 goals in a single Premier League season back in 2006-07.

Joe Hart returns to the bench after illness.

We’re unchanged, with Hart back in the squad after recovering from illness. pic.twitter.com/Bz6khYpD9X