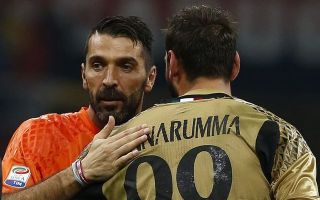 The Rossoneri started the game well as they looked a threat in the opening 45 minutes and kept things tight at the back to deny Juve any clear chances.

Donnarumma was called into action twice by Paulo Dybala as he produced two fine saves, but his good work was over shortly after as he was guilty of two howlers to set Juventus on their way to a comprehensive win.

Firstly, he failed to keep out Douglas Costa’s shot as he appeared to try to catch it before it squirmed out of his hands and into the back of the net while he then dropped a corner which Mehdi Benatia duly dispatched for his second of the game.

In turn, it would have been a difficult experience for the 19-year-old who looked distraught after the full-time whistle and was seen being consoled by opposite number Gianluigi Buffon.

According to Calciomercato, the Juventus stalwart had words of comfort for his compatriot, insisting: “You still have 20 years ahead of you” – thus suggesting that he’ll have plenty of time to mature and grow as a player to put these disappointing setbacks behind him and become better for it.

In his defence, Donnarumma has gone through the early stages of his career displaying an impressive level of maturity and consistency while he has saved Milan many points along the way with crucial saves.

Although it’s of course not ideal for his side that he made these blunders on such a big night, Buffon’s words of advice have plenty of merit and it remains to be seen if the young shot-stopper uses it to his advantage to improve himself moving forward.