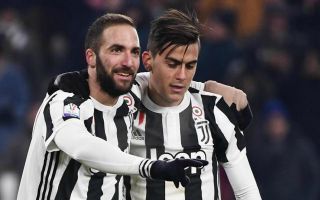 Chelsea reportedly look to have the upper hand in the transfer pursuit of Juventus striker Gonzalo Higuain as he looks set to be on the move this summer.

Citing Italian sources, football.london claim that both Chelsea and Arsenal are in for the prolific Argentine, while Paris Saint-Germain have also been suitors in the past but would now struggle to get a deal done due to Financial Fair Play restrictions.

Higuain has long been one of the finest strikers in the world but has really come into his own during his five years in Serie A with Napoli and Juventus.

The 30-year-old has 146 goals in all competitions in his time in Italy, and would undoubtedly be an upgrade on Alvaro Morata after a difficult first season at Stamford Bridge.

In fact, it is Morata who could give the Blues the edge over Arsenal in any deal for Higuain, with football.london reporting that the Spaniard is in talks over a move to Turin.

Chelsea fans would love to see their club sign a genuinely big name again and it’s vital they get it right up front next season after a botched effort at replacing Diego Costa with Morata.

The 25-year-old has scored only 15 goals for the west Londoners in all competitions this season, looking unfit and unconfident at various points during the campaign.