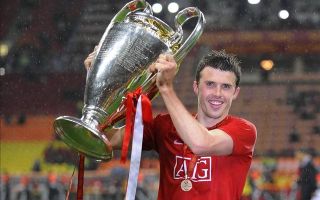 Man Utd midfield ace Michael Carrick has been at the club since 2006, and so it’s fair to say that he’s shared the pitch with some top players in his time.

The United stalwart will hang his boots up at the end of the season having made well over 400 appearances for the club, winning five Premier League titles, the Champions League, the Club World Cup and several other trophies too.

During another trophy-laden spell in Sir Alex Ferguson’s tenure, the Red Devils had some of the top players in Europe at Old Trafford in the mid to late 2000s, but Carrick has revealed the one player who he puts above the rest as the best he’s played alongside.

Many would expect the answer to be Cristiano Ronaldo as he proved to be on the world’s best before his move to Real Madrid, but it is in fact Paul Scholes.

“I’d have to say Scholesy because I just played so close to him, you know,” he said, as per ESPN. “I’ve played with some world-class players, some of the best that’s played the game, but Scholesy was just something else. I still think I’m just fortunate to have seen him train every day and having the best seat in the house, stood next to him passing the ball and seeing what he could do with it.

“It was just outrageous how good he was. I could pick 10-15 players that I played with over the years — Ronaldo, Wazza [Rooney], Rio [Ferdinand], Giggsy, Gaz Nev [Gary Neville] … [he was an] unbelievable full-back, unbelievable captain — but Scholesy just nicks it.”

It will be an emotional weekend for Carrick as he features for the last time as a Man Utd player, but with a coaching role waiting for him, he’ll hope to continue to play a fundamental role at the club moving forward.

Nevertheless, as the last of the 2008 side that won the Champions League, it also marks an end of an era for Man Utd too.