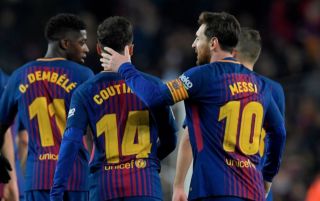 Barcelona travel to Levante as they hope to make La Liga history and go the entire season unbeaten.

Barca faced their toughest test last week in El Clasico when they went down to 10 men, however, they held for a 2-2 draw after taking the lead through Luis Suarez and Lionel Messi.

However, they followed this with a 5-1 hammering against Villareal with Ousmane Dembele scoring a late brace.

The Catalan side last lost a league game on April 8, 2017  and have already set the all-time record for unbeaten games, with 43 games undefeated since that day.

Should Barca avoid defeat to 16th place Levante, they will take on Real Sociedad next weekend at the Nou Camp to create history.

When is Levante vs Barcelona and what time is kick-off?

Barcelona travel to Levante with kick-off scheduled for 7.45pm on Sunday, May 13.

The match is being shown live on Sky Sports Football with coverage starting at 7.40pm.

Andres Iniesta plays his penultimate game for the Catalan giants before leaving his boyhood club this summer.

Sergi Roberto will be suspended following his clash with Marcelo against Real Madrid last weekend.

Samuel Umtiti is a doubt with a knee problem.

For Levante, left-back Tono and midfielder Chieck Doukoure will both miss the game through injury.