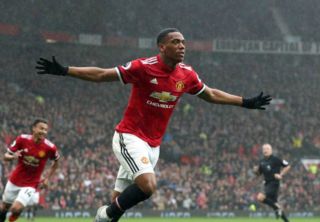 Man Utd take on Watford on the final day of the Premier League season, but Anthony Martial will play no part for the Red Devils at Old Trafford.

Speculation has been rife over the Frenchman’s future at United, with the Manchester Evening News going through the clubs that he could leave for this summer.

SEE MORE: ‘Get that Portuguese c**t out’ – Manchester United fans in a rage at Jose Mourinho selection call vs Watford

In turn, the fact that he wasn’t involved in the match day squad this weekend sparked further talk over his future but as reported by ESPN, he has been left out due an injury according to official sources at MUTV as he left the ground just hours before kick-off.

The 22-year-old has endured a frustrating campaign as although he’s made 44 appearances in all competitions, many of those outings have come off the bench as he has struggled to cement his place in the starting line-up.

With 11 goals and nine assists in those appearances, he has shown his class at times, and so he may well feel that a prominent role elsewhere could allow him to showcase his full potential.

Time will tell as to whether or not Man Utd fans will see Martial in a Red Devils jersey again next season, but while his absence will undoubtedly have sparked further talk over his future and a potential exit, the word from Old Trafford is that he’s merely out with an injury issue.

It doesn’t reflect well on him though that he didn’t stay at the stadium and watch his teammates coupled with post-match farewells likely too on the last day of the season with supporters.