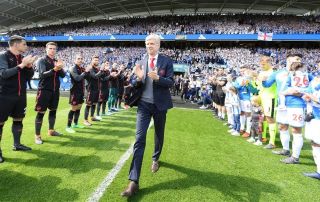 Arsenal won 1-0 in Arsene Wenger’s last game in charge as they ended their Premier League campaign with victory at Huddersfield Town.

It’s the last we’ll be seeing of Wenger in the Arsenal dugout as he recently announced his decision to step down as Gunners boss at the end of this campaign.

You have to start with the overall mood of the game, with Huddersfield playing their part with some touches of class towards Wenger, giving him the perfect sent-off.

This resulted in some superb banter between both sets of fans as well, with this from Arsenal fans surely the chant of the season…

It was, what, 93 years ago Herbert Chapman left Huddersfield for Arsenal? Gooners get quite a lot of stick as a fan-base but fair play to them for this level of historical knowledge about their club.

The game itself wasn’t exactly a classic, but there’s more good from Pierre-Emerick Aubameyang, who has been a rather excellent signing indeed:

The fastest of starts for the Gunners. ?? pic.twitter.com/h0kd146CYo

Not too much to complain about from an Arsenal or Huddersfield point of view today, but the fact that this is the first time Arsenal have picked up points on the road in 2018 is pretty staggering and a reminder of why Wenger is probably right to be stepping down now, but we don’t want to dwell on that on his final day…

Third plane has just flown overhead with a "Kroenke you're next" banner. What a club pic.twitter.com/7iP5fK1Ndt