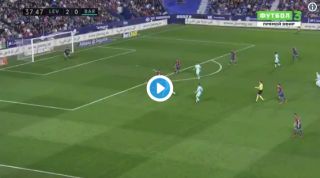 Barcelona star Philippe Coutinho scored a superb goal for the La Liga champions to make it 2-1 against Levante at half time.

However, Levante have since hit back to make it 4-1 and look in a strong position to finally end Barca’s long unbeaten run in the Spanish top flight.

This would be their first defeat of the season and although Coutinho’s sublime effort initially reduced the deficit, it might not be enough.

The Brazil international may only have joined the Catalan giants from Liverpool in January, but he’s settled pretty well so far with seven goals and five assists for his new club.

Here’s his latest, and it’s a real beauty from outside the box: