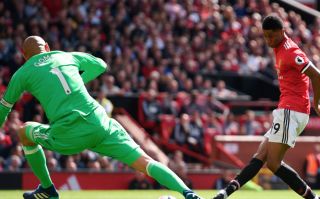 A fantastic piece of play from Juan Mata proved to be the difference today, as Man United ended their season in style with a simple 1-0 win over Watford at Old Trafford to send themselves into the FA Cup final in good form.

The only goal of the game came midway through the first half, as a fantastic touch and unselfish pass from Mata allowed Marcus Rashford to tap home to put the home side one goal to the good.

The win means that United finished on a total of 81 points, their highest total since Sir Alex Ferguson left the club in 2013.

Following their win, we’ve picked out the Good, the Sad and the Brilliant from the Red Devils’ 1-0 win against Watford this afternoon.

Spanish international Juan Mata was absolute class today against the Hornets, with the midfielder doing everything in his power to help United secure the three points.

The former Chelsea star was at the heart of all things positive for the home side today, with the player even picking up an assist for his troubles as well.

It’s performances like this that really make you question as to why Mata isn’t the first name on Mourinho’s team sheet every week.

Mata has been brilliant today

With Anthony Martial being left out of United’s squad for today’s game, it seems from the outside as if his career at Old Trafford may be coming to an end.

A lot was expected of the Frenchman when he first signed from Monaco all the way back in 2015, however the winger has somewhat failed to live up to expectations.

If Martial does end up leaving the club in the near future, only time will tell if United’s decision to let him go will turn out to be a smart one.

Martial’s gone it seems. So sad.

Juan Mata’s assist for Rashford’s opener today was a thing of beauty, with the Spanish international showcasing what he’s all about with hand in United’s only goal of the game this afternoon.

The midfielder’s first touch was one any player would’ve been proud of, and his vision and unselfishness to set up Rashford for an easy tap-in was utterly class.

Yes Rashford, great assist by Mata and of course it had to be created by Carrick, what a man! ? #MUFC