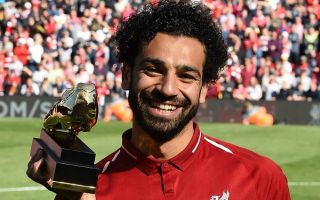 The Egypt international finished as top scorer in the Premier League with 32 goals – overtaking former Reds striker Luis Suarez along with Cristiano Ronaldo and Alan Shearer as the highest scorer in a 38-game campaign.

As well as that, Salah has leapfrogged Suarez in the Fantasy Football as well, with the Uruguayan’s record of 295 points in 2013/14 the previous record.

Of course, it’s what happens on the pitch that matters most, but it does go some way to illustrating just how remarkable a season this has been from Salah.

The 25-year-old also picked up PFA Player of the Year for his troubles this term, and his focus will now be on helping Liverpool win a sixth Champions League title in the final against Real Madrid later this month.

For now, well done to those of you who picked Salah in your Fantasy teams!