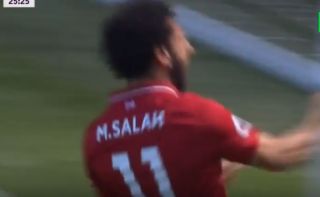 Liverpool star Mohamed Salah has just made Premier League history by scoring his 32nd goal of a 38-game league season.

The Egypt international has now moved ahead of former Reds star Luis Suarez, as well as legendary forwards Cristiano Ronaldo and Alan Shearer for the most goals scored over a single Premier League campaign since it changed from 42 matches to 38.

Salah’s latest goal puts Liverpool 1-0 up against Brighton and moves him clear again of Tottenham’s Harry Kane in the running for the Golden Boot.

With Kane scoring for Spurs against Leicester City early on in their game at Wembley this afternoon, there had looked the possibility of him overtaking Salah late on.

Most goals in a 38-game Premier League season:

However, that is surely now increasingly unlikely with time ticking away and Salah now three goals ahead again at the time of writing.

Liverpool fans will be relieved as well to see Salah on the score-sheet again after a mini goal drought, with the club needing him at the top of his game for the upcoming Champions League final against Real Madrid at the end of the month.

Salah has scored 44 goals in all competitions for the Liverpool in this incredible debut season at Anfield.