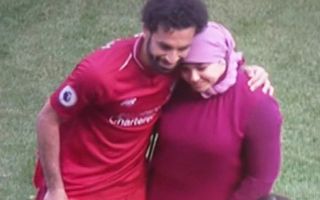 Now, we’ve seen Mohamed Salah prove that he’s pretty good at football this season, however it seems as if he’s not the only one in his family who’s good with a ball at their feet!

Salah was joined on the pitch by his family today after Liverpool’s 4-0 win against Brighton at Anfield, with the Egyptian celebrating winning the ‘Premier League Golden Boot’ after scoring his 32nd goal of the season.

After the presentation, his daughter took the chance to show of her skills to the Anfield faithful, as her mother (and Salah’s wife), Magi, looked on from the crowd.

From the show Salah’s daughter put in, it seems she’s certainly been blessed with her father’s sporting talent.

All of the Anfield crowd were loving it, with the fans cheering whenever she touched the ball, and they even had the cheek to boo Salah after he took the ball off her for a brief moment.

After showing her skills on the pitch today, we may just see Salah’s daughter follow her father’s footsteps and join the footballing world in the not too distant future.

I guarantee this will be the loveliest 1min30 of your day
Anfield encouraging the wee daughter of our Golden boot winning Mo Salah
Love this, almost as much as she is ??? @MoSalah#EGYPTIANKING #EGYPTIANPRINCESS#LFC #YNWA #Goldenboot pic.twitter.com/MwQilmnOYJ

the crowd booing Salah when he took the ball off his daughter?? https://t.co/Z9KFyH0odk

Salah taking the piss out of Harry Kane by bringing his daughter out with him to receive the golden boot from the king really made my day. ??

Salah came out with his daughter to collect the #Goldenboot ! The man is a troll. Take that L Mr Touch @HKane ?#LFC #Kane #Tottenham pic.twitter.com/5awxyiF2o0

Nice easy end of season game for @lfc nice to see a goal for @DomSolanke and well done @andrewrobertso5 a solid season from a quality left back!! Final mention to @MoSalah daughter who can hold the attention of the crowd better than her dad!!! pic.twitter.com/Nea7UJtbmM