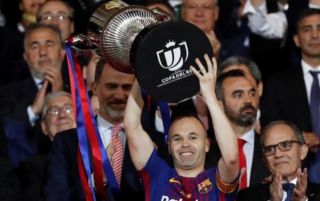 Barcelona will have a major void to fill this summer as Andres Iniesta prepares to play his last two games for the club before moving on at the end of the season.

The 34-year-old club icon has been at the Nou Camp since 1996 having come through the youth ranks. Following on from that, he’s been a major part of the starting line-up since 2004 as he’s featured 40 or more times in all competitions in all but last season.

That goes to show how crucial he has been to Barcelona in a glittering career with the Catalan giants in what has been a trophy-laden spell with the club and it’s certainly going to be difficult to ‘replace’ him with a player capable of offering the quality and consistency that he has over the last decade and more.

However, based on these comments from coach Ernesto Valverde, it sounds as though he believes that Barca may not need to splash out on a new signing to replace Iniesta, as he may well look to options currently at his disposal to do that.

“The first idea is to look at what we have here,” he is quoted as saying by Goal.com. “[Philippe] Coutinho’s good in [Iniesta’s] position and there are other players, too, like Alena from the B team.

“I think it’s more or less clear [Alena will be promoted], he’s been training with us all season.”

Ultimately, there is no replacing a player like Iniesta. Barcelona can only try to ensure that his loss has a minimal negative impact on the team as aside from his class on the pitch, his leadership and experience are also irreplaceable attributes.

Coutinho has seemingly struggled in that role this season as he has to develop his defensive work too if he is to play a little deeper than usual, while Carles Alena will have to prove himself at the top level consistently to emerge as another top prospect for the future.

Iniesta does leave Barcelona in a good place given they’ve done the domestic double this season, but his absence will be hard to overcome regardless of whether signings are made or others are promoted into more prominent roles.