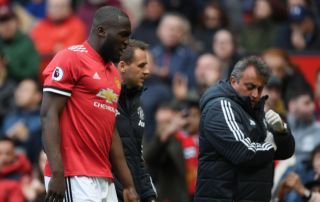 Man Utd face Chelsea in the FA Cup final at Wembley next Saturday, and they’re still sweating over the fitness of top goalscorer Romelu Lukaku.

The 25-year-old sustained his ankle issue against Arsenal last month, and so while he’ll also be desperate to prove his fitness ahead of the World Cup this summer, he will want to be involved in the domestic season finale with a trophy up for grabs.

Jose Mourinho will undoubtedly share that desire given the Belgian international has been so influential this season, scoring 27 goals and providing nine assists in 50 appearances in all competitions.

His presence up front could be a real problem for the Chelsea backline alone with his physicality and ability to stretch the defence, and so it remains to be seen if he is indeed passed fit.

One thing that is certain is that he’s working hard to recover and get the green light from the United medical staff, as seen in the video below, as he’s seemingly stepping up his recovery and pushing to be involved against his former club.

Having fallen way short in the Premier League title race and faced disappointment in the Champions League, Mourinho and Man Utd will be desperate to land a trophy and end the season on a high note. Having Lukaku available will certainly help them achieve that.