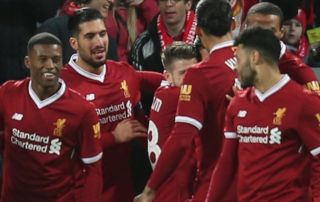 With his contract set to expire this summer and with no renewal seemingly imminent, Liverpool midfielder Emre Can has been tipped to leave Anfield, as per reports.

The 24-year-old joined the Reds in 2014, and has gone on to make 40 or more appearances in all competitions for the club in each season since.

SEE MORE: Man United could be set to rival Liverpool in race to secure transfer of €80M Real Madrid star

He will fall short of that feat this time round as he’s been sidelined with a troublesome back injury in recent weeks, but there’s no denying that he has been a crucial part of Jurgen Klopp’s plans.

In turn, losing him will be a blow for Liverpool, but even more damaging is the fact that if he does leave this summer, he will do so on a free transfer when his contract runs down thus leading to the Merseyside giants being left empty-handed.

According to The Express, via Corriere dello Sport, it’s been claimed that Juventus will announce his signing 24 hours after the Champions League final.

If accurate, it’s a helpful move as Liverpool won’t want any distractions prior to the showdown with Real Madrid in Kiev on May 26, albeit it seems likely that Can is moving on regardless.

Nevertheless, to avoid the issues that may come with an announcement confirming his departure and a move to Juventus instead of remaining as part of Klopp’s plans for the future will surely be a boost for them.

With Sami Khedira, Blaise Matuidi and Claudio Marchisio all over 30 now, adding fresh legs and a long-term option in midfield will be a vital move for Juventus this summer to add solidity and mobility to that area of the squad.

Bearing in mind they look set to clinch their fourth consecutive title under Massimiliano Allegri this weekend though, they seem to be doing quite well without Can. He’ll undoubtedly be keen on continuing that run though and landing a few major trophies for himself in Turin if the move materialises.