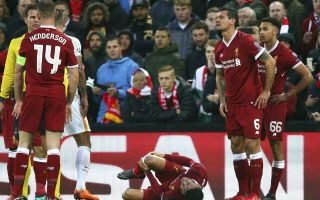 While it had already been confirmed that his season was over, Liverpool ace Alex Oxlade-Chamberlain has reportedly suffered another major setback.

The 24-year-old sustained his knee issue in the Champions League tie with Roma as he went down at Anfield in the first leg last month and it looked to be a real concern immediately.

According to the Liverpool Echo, although the Reds haven’t put an official timeline on his recovery, it’s suggested that they’re planning for a six month absence which means that he won’t be back available for Jurgen Klopp until November.

Should that hold, it will be a massive blow for Oxlade-Chamberlain as he had finally started to show his real potential for Liverpool this season and was growing into a crucial figure for Klopp.

Further, with the World Cup in Russia this summer, he’ll now miss a major tournament and that in itself will be a real disappointment to him no doubt.

This latest timeline for his recovery is also troublesome in that it suggests he won’t be able to get a proper pre-season under his belt, and so while it’s claimed he’ll be back in November, he’ll have to work his way back to full match fitness which may prolong his frustration further.

The England international joined Liverpool on deadline day last summer, and in total, he finished the campaign with five goals and eight assists in 46 games to emerge as a real crowd favourite at Anfield given his commitment and determination.

He’ll have to now work hard but sensibly in his rehabilitation to return from his injury and make a full recovery to get back to the levels that he was displaying this year.