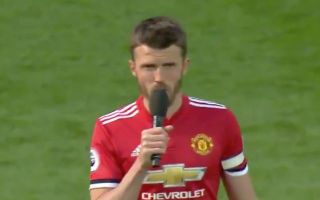 Man Utd midfielder Michael Carrick hung up his boots on Sunday having made his last appearance as a player for the Red Devils at Old Trafford against Watford.

The 37-year-old may yet feature in the FA Cup final against Chelsea next weekend, but if this was his last outing, it ends a 12-year stint as a player for United.

During that time, he’s made 464 appearances for the club, winning five Premier League titles, the Champions League, Europa League and FIFA Club World Cup, in a glittering career.

However, he’s decided the time is right to call it quits in terms of his playing career, but as noted by the official United site, he will take up a new role on the coaching staff alongside Jose Mourinho.

Having worked under some of the top managers in European football, coupled with the fact that he appears to have the required temperament to be a success as a coach, it should work out well for him.

Nevertheless, he had one last duty to carry out in front of the Old Trafford faithful on Sunday, and that was to deliver a classy farewell speech in which he wished Sir Alex Ferguson well after his recent health scare, while also specially thanking the supporters and Mourinho for giving him a new opportunity.

? Time to turn your sound up and listen to @Carras16‘s final words as an #MUFC player at Old Trafford… pic.twitter.com/LZPg8uZ2jF