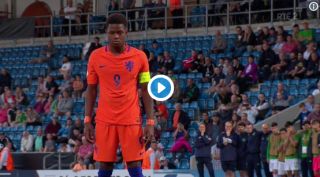 Republic of Ireland’s Under-17 team have been very cruelly knocked out of the European Championships by Holland after a bizarre refereeing decision in the penalty shoot-out.

Remarkably, Ireland’s ‘keeper was given a red card during the shoot-out for stepping slightly off his line to make a save.

While it’s not uncommon to see penalties re-taken for such an offence, it’s equally common for them to simply be let slide quite often.

Ireland have been eliminated from the U17 European championships after their goalkeeper is sent off DURING the penalty shootout for moving off his line too early! Shocking! Via @RTEsoccer pic.twitter.com/PKHJWOZMW4

If there’s been a more bizarre red card in any league this season or in any season for the last five years we can’t remember it!