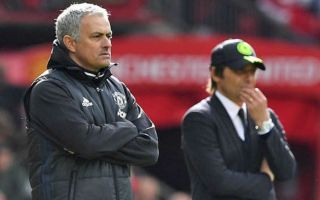 The FA Cup will reach its climax when Chelsea and Manchester contest the showpiece final on Saturday at Wembley.

Both teams will be eager to get their hands on the trophy as it is the only chance of silverware for both clubs having fallen short in the Premier League, Champions League and League Cup.

United secured second place in the Premier League after they drew to West Ham last week and followed that with victory over Watford on the final day of the season – with Marcus Rashford scoring the Red Devils’ winner.

Jose Mourinho’s men will attempt to win their fourth major trophy in three seasons at Wembley.

If United were to win, they would equal Arsenal’s record of 13 FA Cup finals won.

As for Antonio Conte’s Blues, they will attempt to salvage a disappointing season after they finished 5th in the Premier League.

They ended their campaign by losing 3-0 to Newcastle with Ayoze Perez netting a brace, and so the Italian tactician will certainly be seeking a positive reaction from his players to bounce back.

When is Chelsea vs Man Utd FA Cup Final and what time is kick-off?

The Final will be televised live for free on BBC One with the build up starting at 4:10pm.

Frenchman Anthony Martial is a doubt for Saturday’s clash after he sat out the win over Watford, but striker Romelu Lukaku is likely to be fit, as reported by the BBC.

However, there still remains question marks over the Belgium striker’s fitness as per the Evening Standard, and his absence would be a blow as he’s bagged 27 goals in 50 appearances this season to emerge as a crucial figure for Mourinho’s men.