Speculation has been rife over the future of Juventus ace Kwadwo Asamoah as his current contract is set to expire at the end of the season.

The 29-year-old has emerged as an important piece in Massimiliano Allegri’s squad this year, making 26 appearances in all competitions.

Since joining the club in 2012, he’s won six Serie A titles, four Coppa Italia trophies and has been to the Champions League final twice, and with that dominance potentially set to continue under Allegri moving forward, it seems strange that he’s set to move on.

That’s what Calciomercato claim is the most likely scenario now, as it’s suggested that the Ghana international underwent a medical on Tuesday ahead of joining Inter this summer.

Further it’s even suggested that he’s agreed on a contract until 2021, and given his reliability and consistency, it’s certainly a smart move from Luciano Spalletti.

In contrast, it’s arguably quite a concerning development for Juventus as The Mirror also note that Alex Sandro is being tipped to join Manchester United when the season concludes.

That would leave them short on the left flank, and so the Turin giants will potentially be forced to bring in quality and depth in the form of fresh faces to bolster that area.

Nevertheless, as they prepare to celebrate winning their seventh consecutive Scudetto this weekend, Asamoah and perhaps Sandro will both have one last opportunity to play for the Bianconeri before bidding farewell this summer if these reports are to be believed.

Just as they’ve shown in recent years though having lost the likes of Andrea Pirlo, Arturo Vidal and Paul Pogba, not to suggest that this is potentially equally as damaging, Juve have a way of reinventing themselves and continuing their success. 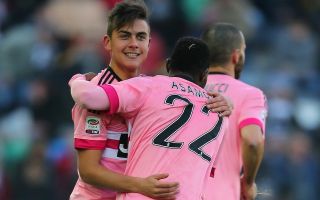