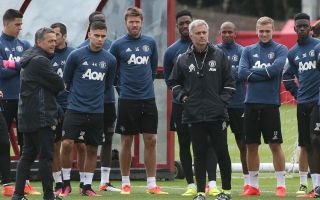 Michael Carrick called time on his Man Utd playing career at the weekend, and now Jose Mourinho is wasting no time putting him to work as part of his coaching staff.

The midfield stalwart ended a glittering 12-year spell at Old Trafford as a player on Sunday, and he will now look to make big strides as a coach at the club having been given a great opportunity.

However, according to The Sun, his first job will be a scouting mission, as the Portuguese tactician wants Carrick to help him find a replacement for him in the United starting line-up.

The 36-year-old was a crucial figure in the success of the Red Devils over the past decade or so in his deep lying midfield role, winning five Premier League titles, the Champions League, the Europa League and many other major honours.

In turn, filling that void will be a difficult challenge, but who better to provide insight into what is required and which players have the characteristics to successfully take the reins than Carrick himself.

It remains to be seen if that leads to the right transfer target being identified and signed to be a success at Man Utd, but ultimately, it’s an important first job for the former England international as he will look to prove his worth to the club and Mourinho as quickly as possible in his new role.