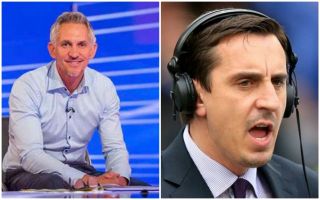 The 2018 World Cup in Russia is fast approaching, and punditry line-ups for BBC Sport and ITV Sport have been revealed.

As the world’s biggest stars descend on Russia, it’s always a talking point as to which pundits will be offering their insight and opinions on matters across the tournament.

SEE MORE: Why Mesut Ozil is in trouble with German FA chief, Man City star in hot water too

Naturally, there will be more popular pundits than others, but both broadcasting giants have gone with big names across the board as they look to provide the best coverage of the football this summer with those who have plenty of first-hand experience in the game.

Gary Lineker will be expected to lead hosting duties for the BBC, and as seen in the tweet below, Frank Lampard, Rio Ferdinand, Alan Shearer, Alex Scott and Danny Murphy are just some of the names who will be appearing on our screens on that side of the battle for ratings.

As for ITV, they’ve landed arguably the biggest addition with Gary Neville joining the team, as he prepares to join Roy Keane, Ian Wright, Lee Dixon, Ryan Giggs and many more.

The Sky Sports pundit has earned himself a reputation of being one of the top names in the industry after hanging his boots up, and so it will be interesting to see the feedback he gets.

It promises to be an exciting tournament with some big names appearing on the pitch, and it will be interesting to hear the views of those mentioned below as BBC and ITV, albeit will share coverage, are still out to make the biggest impact and earn the most praise for their work covering the tournament.

And more to come ?https://t.co/94QD03CnDi#WorldCup

Squad announcement! Here’s the @ITV line-up for the 2018 @FIFAWorldCup this summer!

All the details here including extra content from @TheF2 and a brand new World Cup podcast ?https://t.co/QFdcJAtAPd pic.twitter.com/hWPFSMuHCf