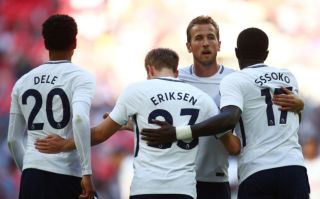 His comments are unlikely to go down well with Tottenham fans, but Thomas Sorensen believes that Christian Eriksen is ready for a major transfer.

The Danish playmaker has undoubtedly been a key figure for Spurs for some time now, and he’s enjoyed another stellar campaign this year with 14 goals and 13 assists in 47 appearances.

That has been crucial in securing a top four finish to ensure Tottenham will be in the Champions League again next season, and so it would come as no surprise if the club were desperate to keep him in north London.

However, former Danish international Sorensen has been speaking about his compatriot, and he has urged him to consider an exit to the likes of Barcelona or Real Madrid if they come calling, as in his opinion, he’s more than worthy of playing for such European giants.

“He is a loyal guy, so for him to leave Tottenham it would need to be something special,” Sorensen told Omnisport. “If Barcelona or Real Madrid came calling, he would definitely need to consider it. He would definitely fit in there — he’s mature enough now to go to a big club like that with the expectations and playing with other great players.

“He is at the right time now that he’s ready for that so, if the opportunity comes and it’s possible for him, he should go.”

Given the technical quality, creative ability and work ethic that the 26-year-old possesses, it’s hard to disagree with Sorensen’s assessment and suggestion that Eriksen could thrive at either Barca or Madrid as he’ll be playing at the highest level and competing for major honours year in and year out.

However, much will depend on that loyalty to Spurs and if he wishes to remain for the foreseeable future as Mauricio Pochettino’s side continue to threaten to make a key breakthrough in their pursuit of trophies, and importantly, if Barcelona or Real Madrid are even plotting a move for him.

With the likes of Gareth Bale, Isco, Marco Asensio and Lucas Vazquez already vying for places behind Cristiano Ronaldo and Karim Benzema, along with Lionel Messi, Luis Suarez, Ousmane Dembele and Philippe Coutinho at the Nou Camp, it’s questionable if either need a player like Eriksen currently.