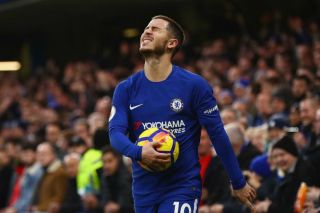 Although they still have a chance to salvage something from the season with the FA Cup final, it hasn’t been a great campaign for Chelsea.

A year on from Antonio Conte winning the Premier League title in his first season in charge at Stamford Bridge, the Italian tactician wasn’t even able to get them back into the Champions League this time round with their fifth-placed finish.

SEE MORE: Arsenal open talks with £40m Chelsea target as transfer-fixer looks to bring player to London after almost signing him for Barcelona

In turn, it remains to be seen if key signings are made this summer in order to bolster the squad and ensure that they can compete with their rivals again.

According to The Sun, not only is that going to be crucial to freshen things up at Chelsea, but it may be fundamental in convincing Eden Hazard to sign a new contract and commit his future to the Blues.

“I’m taking my time. I’m waiting for new players next season. We will see,” he is quoted as saying in the report from the Sun. “I want players, I want to win the Premier League next season…a lot of things.

“It is something big, so I will need to think of a lot of things.”

With two years remaining on his current contract, the Belgian international’s future is arguably not a major concern just yet as Chelsea still have time to hold negotiations and reach a new agreement without facing the pressure of him leaving on a free transfer.

Nevertheless, given his importance to the side and the likely desire to keep him in west London, this will be a concern for all connected with the club as Hazard is effectively questioning the ambition of Chelsea and whether or not they’re willing to make the necessary changes to compete.

The 27-year-old has had a decent season, scoring 16 goals and providing 13 assists in 51 appearances in all competitions. He’ll be desperately hoping to add to that tally at Wembley on Saturday to at least end this season on a positive note before waiting on important additions this summer.