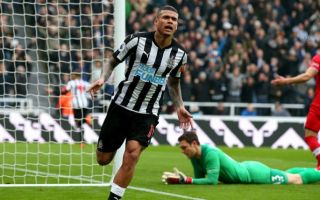 Chelsea sent out two of their youngsters out on loan this past season, and reports claim that the pair could be shipped out again next year.

Given that they finished in a disappointing fifth place in the Premier League, it arguably would have been an ideal time to bring back their players and refresh the look of the squad.

Kenedy 22, has been with Newcastle United where he scored three goals and provided four assists in 18 appearances while Tammy Abraham, 20, was at Swansea City and bagged eight goals and five assists in 39 outings.

Those numbers don’t particularly stand out as being anything spectacular in truth, and so perhaps it’s the right move from Chelsea to send them back out on loan to gain more experience and prove their future worth to the Blues.

According to The Sun, via TeamTalk, the pair could find themselves playing alongside each other next season as both are being linked with loan stints at Newcastle as Rafa Benitez looks to bolster his squad and improve on this year.

Kenedy will know the surroundings well of course, while it could be an ideal solution for Abraham not to play at a club struggling to preserve their top flight status which could bring the best out of him, as he experienced with the Swans.

Chelsea struggled for goals this past season, scoring just 62 in 38 league games, which was the worst return out of the top six sides.

However, that doesn’t appear to be enough to convince them to bring back these two attacking young talents as they’ll seemingly be on the move again before the start of next season, as per the report.