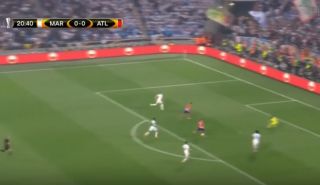 Antoine Griezmann has given Atletico Madrid a 1-0 lead over Marseille in the Europa League final this evening with a cool and composed finish.

The chance came after a dreadful mistake at the back by the Ligue 1 side, who had started reasonably well and looked confident with the backing of a noisy crowd in tonight’s final hosted in France.

Still, Griezmann is also enjoying being back in his home country and has continued a remarkable record in the Europa League with tonight’s opening goal.

The 27-year-old has now scored in every round of this season’s competition that he’s played in since Atletico entered it following being knocked out of the Champions League group stage.

Clearly one of the best players in the world, Griezmann scored a crucial away goal against Arsenal in the semi-final and is showing he can be the man for the big occasion as well.

? Griezmann has now scored in every Knockout round of the Europa League this season…

The former Real Sociedad man hasn’t had the best luck in previous finals, failing to score against Real Madrid in the 2016 Champions League final and then for France against Portugal in the final of Euro 2016 that summer.