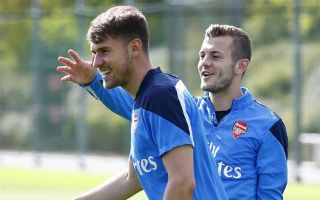 Speculation is rife that Arsenal midfielder Jack Wilshere will not be part of the England squad travelling to Russia this summer for the World Cup.

England boss Gareth Southgate will make an official announcement on his 23-man squad on Wednesday afternoon, but as per BBC Sport, Wilshere isn’t expected to be amongst the travelling party next month.

SEE MORE: ‘Are you having a laugh?’ – Arsenal fans fume over Wilshere’s touted England snub for World Cup

In turn, that will come as a major disappointment to him having proven his fitness and form with Arsenal this season to emerge as a key figure in north London once again after his injury problems.

He managed to get back on track during his loan spell with Bournemouth last season, but it hasn’t been enough to convince Southgate to take him to Russia it seems.

With that in mind, that leaves a major part of his summer now free, and while he still has to sort out his club future given his Arsenal contract expires in just over a month, he’s been receiving alternative offers to going to Russia.

As seen below, one fan has offered him the chance to join him and his mates on a lads holiday in Zante, to which Wilshere has responded with an hilarious tweet asking for the dates and if his newborn baby can tag along too.

It’s good to see that he’s taken what would have been disappointing news well and has a sense of humour about it. For the England international now, it will be about having a good summer and continuing to impress next season.

Can i bring the baby aswell? https://t.co/fWLpEGZgB6