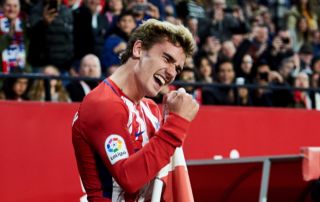 Antoine Griezmann played a starring role for Atletico Madrid in their Europa League triumph on Wednesday night, but Barcelona talk wasn’t far away.

The French international scored twice in their 3-0 win over Marseille in Lyon, as they lifted the trophy and secured a positive end to the campaign with one more La Liga outing remaining.

That took Atleti’s talisman to 29 goals and 15 assists in 48 appearances this season, underlining his importance to Diego Simeone’s side and his ability to come good in big situations when his team need him.

As noted by BBC Sport, ongoing speculation continues to link Barcelona with a swoop for the 27-year-old, with the Catalan giants looking to bolster their attacking options further this summer it seems.

However, Griezmann wasn’t interested in discussing that on Wednesday night as he was keen to enjoy the celebrations with his Atleti teammates and supporters who made the trip to France.

“It is not the moment to talk about my future, I must enjoy having won a trophy, and celebrate it with the fans. The truth is this was a dream for me, to win a trophy with Atletico, with [Diego Simeone] and my friends and teammates,” he is quoted as saying by ESPN.

“Your feeling for a club gets stronger every game, every year. I’ve been here four years, and I have enjoyed today with the fans, the people of the club, my relationship with them is strong, which is why I give everything on the pitch.”

It could argued that winning the trophy and writing his name into club folklore could be factors in convincing Griezmann to perhaps even say at the Wanda Metropolitano.

Assessing his comments above, he evidently has a special relationship with the club, manager and fans, and having now enjoyed success with them, it could persuade him to remain as a prominent figure with the capital club and snub a potential move to the Nou Camp where he would be one piece of the puzzle alongside the likes of Lionel Messi and Luis Suarez.

Time will tell what he decides to do, but Atleti will surely be keen to see him commit his future and remain a pivotal figure for them in the coming years.