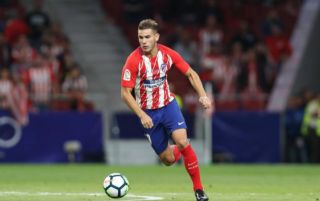 Real Madrid are targeting Lucas Hernandez from their city rivals, Atletico Madrid, according to Don Balon.

Los Blancos will be hoping to join Atletico in European glory when they face Liverpool in the Champions League final on Saturday week. And the defending champions are plotting a raid for versatile defender Hernandez, as per Don Balon.

Hernandez can play at either left or centre-back, and could provide a long-term solution for Real’s ageing backline.

At 22 years of age, his prime years are well ahead of him, and he has been a part of Diego Simeone’s side that has kept a remarkable 23 cleans in La Liga this season, conceding only 20 goals.

Hernandez could be united with his brother, Theo, who plays for Los Blancos, so it is easy to see why Real could be tempted to launch a bid for the star.

He is hoping his performances have been enough to make Didier Deschamps France World Cup squad.

As reported by Goal, he said: “I’m really happy, proud of what I have done this season,

“I’ve improved myself a lot, I’ve learned many things and I’ve acquired a good deal of experience. I hope I will be in it.”