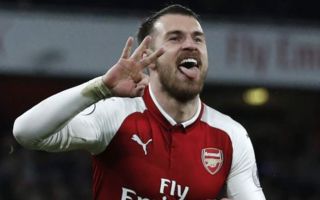 Aaron Ramsey has been named Arsenal’s player of the season beating Nacho Monreal and Mesut Ozil.

The Welsh star also scored the club’s goal of the season, with fans voting his audacious lob against CSKA Moscow as the best of the season.

SEE MORE: ‘He is ready for the Arsenal job’ – Managerial candidate given backing by Spanish football expert

He has replicated his consistent goalscoring form this term as evident with his first hat-trick for the club against Everton at the Emirates Stadium.

Arsenal will hope to keep the 27-year-old, but would like to avoid a repeat of the contract situations they faced with Alexis Sanchez and Mesut Ozil.

According to The Sun, they claim that if Ramsey doesn’t make progress in talks before his current deal expires next year, he could be sold with a £40m valuation provided and both Man Utd and Chelsea specifically mentioned as interested parties.

Ramsey has enjoyed his most influential campaign for the Gunners this season and ended the campaign in double figures for goals and assists, scoring 11 and laying on a further 12 in 32 appearances.

Only Alexandre Lacazette outscored him and Ozil assisted more goals for team-mates.

Ramsey has become an integral part of the Gunners’ midfield and has enjoyed his best campaign when he was named the 2013/2014 Arsenal player of the season.

Ramsey is a dying breed of genuine box-to-box goalscoring midfielders; and for Arsenal, it is vital they reward him with a contract on par with Lacazette, Pierre-Emerick Aubameyang and Henrikh Mkhitaryan, otherwise they could risk losing him to Europe’s best clubs.