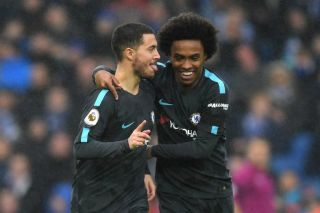 Chelsea fans took to social media to express their outrage towards Antonio Conte for leaving a key star out of his side to face Manchester United in the FA Cup final.

Antonio Conte has received a flurry of abuse from Chelsea fans for starting Tiémoué Bakayoko ahead of Willian in the FA Cup final vs Manchester United.

The Italian boss has opted to field a significantly pragmatic side to start against Jose Mourinho’s Manchester United this evening with the likes of Pedro, Willian and Alvaro Morata all being left on the bench by Conte.

The Blues will look to pack the heart of their midfield with a trio of Tiémoué Bakayoko, Cesc Fabregas and N’golo Kante in what would appear to be an attempt to suffocate United’s Paul Pogba.

Gary Cahill will also start in a back three after missing a large chunk of Chelsea’s season.

Olivier Giroud and Eden Hazard offer Chelsea’s only attacking threats with the Belgian playmaker likely to play off of Frenchman Giroud in a make-shift attacking front two.

United however will be without Romelu Lukaku who has failed to regain sufficient levels of fitness to start this evening’s clash. You can see both side’s starting eleven’s below.

Chelsea fans took to social media to express their disapproval of today’s starting eleven for the FA Cup final with some conceding that Chelsea have already lost and that Conte should now part ways with the Stamford Bridge faithful at the nearest possible opportunity.

If Bakayoko’s name pops up on the starting line up,Then I know we lost already.#FACupFinal

Chelsea have lost already with bakayoko in midfield, ten men with him #useless #FACupFinal

Cahill? Bakayoko? Don’t piss me off!

I saw Bakayoko’s name on the teamlist and it drowned the bit of hope I had ?

I think Chelsea would have better off starting Willian personally over Bakayoko/Fabregas.

Although I do understand Conte not wanting to be out numbered in midfield.

Come on Chelsea! Let’s win this then sack conte

You can’t look at this line up and tell me Conte isn’t purposely trying to get the sack. Bakayoko? Willian on the bench? Incredible. https://t.co/lL8IiYi083