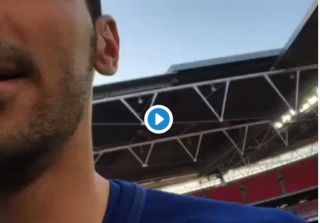 Chelsea striker Alvaro Morata’s FA Cup celebrations had a touch of Cristiano Ronaldo about them as he was filmed by team-mate Davide Zappacosta.

The Spain international finally had something to celebrate after a difficult first season at Stamford Bridge, as his side won the FA Cup final against Manchester United.

MORE: Video: Eden Hazard tells team-mate how he can stop him leaving Chelsea

Morata himself was only a sub today, coming on late in the game as Olivier Giroud was unsurprisingly preferred over him up front.

Still, that did not stop him enjoying the moment with Zappacosta afterwards, letting out a loud and distinctive ‘siiiiii’ in the manner of Ronaldo when he notably did it at the Ballon d’Or ceremony a few years ago.

Chelsea’s win today marked their eighth FA Cup final victory in total, while United have now lost three of the last four they’ve appeared in, including another defeat to the Blues back in 2007.