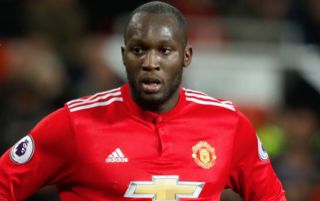 It’s nearly showtime with Chelsea and Manchester Utd about to battle for the prestigious FA Cup trophy, however, there is big news emanating before kick-off.

Man Utd striker Romelu Lukaku has failed to make the starting lineup for the Red Devils because of the ankle injury he sustained in a challenge by young Arsenal Greek defender Konstantinos Mavropanos, however he has made the bench, according to the official Utd Twitter page.

Lukuku has been highly influential to Jose Mourinho this season as he has scored 27 goals in 50 appearances this season, but Marcus Rashford will start upfront for the Red Devils.

David de Gea will start in goal for Manchester Utd against Chelsea in the FA Cup final ahead of Sergio Romero.

Argentine backup ‘keeper, Romero, featured against Watford on the final day of the Premier League season and in the FA Cup before the semi-finals but his previous injury determined who manager Jose Mourinho would play at the Wembley showpiece tomorrow.

“He (Romero) was injured for a long, long time,” said Mourinho, as reported per Sky Sports.

“He was injured for around two and something months.

“He didn’t play some matches that normally would be his matches, his semi-final against Tottenham, a couple more matches before the final.

“He really only trained one week before the Watford match – and a bit more before – and that is the reason.

“Last season the Europa League final was a much more important match than this one, it was giving us the possibility to play Champions League.

“And I played the Europa League final with Sergio, so it is not about confidence or no confidence, it is about the process of the last couple of months, since he had an important injury against Spain.”

As for the Blues, Thibaut Courtois starts ahead of cup ‘Keeper Willy Caballero, according to the BBC.

Willian is also a surprise inclusion on the bench with Antonio Conte opting for Eden Hazard behind France striker Olivier Giroud.