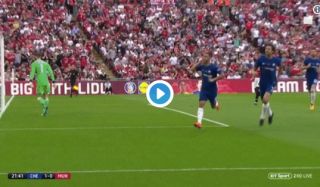 Chelsea are 1-0 up in the FA Cup final thanks to a ridiculously cool penalty from Eden Hazard against Manchester United goalkeeper David de Gea.

Using the technique that’s served him well in the past, the Belgian simply stroked the ball into the back of the net and made it look somehow so easy, even against one of the best goalkeepers in the world.

De Gea has been simply sensational at times for United this season, but he was no match for Hazard here as the Blues have the early edge at Wembley.

It will be interesting to see how the rest of this match plays out now, with United largely seen as the favourites before the game, but with Jose Mourinho not exactly the manager you’d want when chasing a game and requiring a more attacking approach.