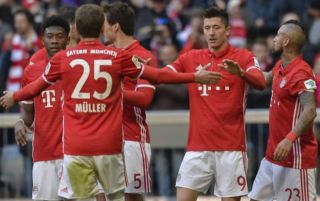 Man United manager Jose Mourinho is reportedly keen on making a move for Bayern Munich and Austria star David Alaba to bolster the physical presence of his Red Devils side.

Don Balon are stating that the United boss, who oversaw the club’s best league finish since the departure of Sir Alex Ferguson this season, is interested in bringing Alaba to Old Trafford, and that he sees the player as one that’ll seriously contribute to the overall physical prowess of his side.

It’s been reported in the past by Don Balon that Alaba is available for around €60M, a price that should be seen as an absolute steal in today’s transfer market.

Since breaking into the first team at the Allianz Arena a number of years ago, the Austrian international has managed to establish himself as one of the club’s best players.

During his career, the 25-year-old has proven that he is able to play in a number of positions, with the player showing that he is capable of playing in all of centre-back, left-back and central midfield.

If United are serious about improving their squad, they’ll have to search long and hard to find a player who’ll improve it more than David Alaba would.