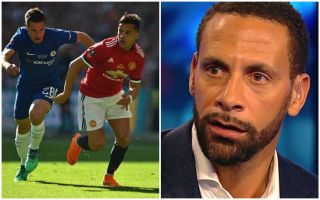 The Red Devils weren’t at their best as Eden Hazard struck the winner from the penalty spot in the first half to hand the trophy to the Blues this year.

This means United finish the season trophyless, which is something of a rarity for them and their manager Jose Mourinho and will surely be the root of plenty of soul searching between now and next season.

Ferdinand played in some of United’s best ever sides, winning a host of major trophies in his 12 years at Old Trafford, but it seems increasingly clear those glory years are over.

United finished second in the Premier League this season and were ultimately runners-up in the cup as well – no wonder Ferdinand looked so ‘gutted’, as he put it in this Instagram upload.

Ferdinand was a passionate player during his United years and it’s clear it hurts to see his old side drop below the high standards they set during the glory years of Sir Alex Ferguson.

The former England international was on punditry duty with BT Sport today and admitted Chelsea deserved credit for a solid defensive display.

Ferdinand: “I wouldn't say Man United were poor today, they just didn't have that cutting edge. They had most of the possession but they just didn't open up this Chelsea team, who actually, you have to give them credit. They defended magnificently today." #mufc [BT]