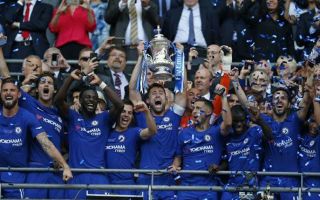 The Blues won their eighth FA Cup after a first-half Eden Hazard penalty gave Antonio Conte’s side a 1-0 win.

READ MORE: Why was Phil Jones not sent off in the FA Cup final? Rule change explains why…

The victory was vitally important for Chelsea, given they have had a poor season in the Premier League and in Europe by their own standards.

Cahill won his first trophy as club captain and admitted today’s victory helped to rescue the club’s struggles this campaign.

Speaking after his side’s victory Cahill said, as per the BBC: “Unbelievable. You can see what it means to us, to the fans and the staff. This was to save our season, we haven’t had a magnificent season by any stretch. We are used to winning, I’m not saying that in an arrogant way.

“We had a lot of defending to do, they pushed us until the very end. We are buzzing. We got the job done.

“This a dream come true because it is my first trophy win as captain of the club. It is extra special for me. I didn’t play in 2012, from a selfish point of view it is not the same feeling when you have not won it on the pitch.

“We needed to win this for everybody, we are not in control of decisions.”