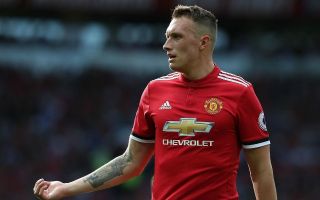 Eden Hazard scored from the penalty spot to give Chelsea 1-0 lead in the FA Cup final against Manchester Utd, however, fans, pundits and Antonio Conte were left bemused why Phil Jones wasn’t shown a red card for his foul on the Belgium star.

Hazard displayed his trademark technique by cushioning a long though ball by Cesc Fabregas to burst away from the hapless Jones who then made a desperate lunge to bring the Belgian down in the penalty area.

MORE: ‘A useless donkey’ – Manchester United fans are distraught with ace as the world trolls him after embarrassment vs Chelsea in FA Cup final

Referee Michael Oliver then brandished Jones a yellow card to the dismay of many Chelsea players and Conte.

Why was Phil Jones not sent off in the FA Cup final?

According to the BBC, there was a change in the rules which in 2016 with the International Football Association Board (IFAB) relaxing rules on giving red cards for fouls committed inside the penalty area.

The rule states that players who foul to deny a goalscoring opportunity will no longer automatically be sent off if the foul was done accidentally.

This was to stop the previous ‘triple-punishment’ after this type of red card.

Laurent Koscielny had this happen to him against Bayern Munich in the Champions League at the Emirates when he was controversially sent off after taking down Robert Lewandowski in the area.

The Frenchman was sent off and Bayern scored from the resulting penalty and he then received a suspension.

However, players committing deliberate fouls will still receive a red card, according to the BBC.

Deliberate fouls include: holding, pulling or pushing, not playing the ball, serious foul play, violent conduct or deliberate handball in order to deny a goalscoring opportunity, as per the BBC.