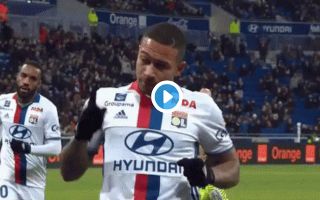 Manchester United fans have had a poor weekend to say the least. Yesterday they had to surrender to Chelsea in the FA Cup final and later that evening they had to watch a former star score an impressive hat-trick.

Manchester United supporters are devastated that they let Memphis Depay leave for Lyon after the star’s hat-trick last night and some have even suggested they should buy him back.

The Dutchman struggled at Man United after joining the Premier League giants in 2015 and was eventually sold under Jose Mourinho in 2017.

Depay was handed the number seven shirt at Old Trafford but he was unable to gain regular game-time let alone fulfil the legacy of the historic United shirt.

It appears however that Depay has settled into his new home considerably better than he did when he moved to United three years ago. The Dutchman scored a hat-trick for Lyon last night as they beat Nice 3-2 at home to book their place in the Champions League for next season. Watch Depay’s three goals below.

Man United fans took to twitter to speculate that United should look to buy back their former star. The Sun reported last year that the Red Devils had installed a £35m buyback option in Depay’s contract.

Further, Depay’s fine form this season is perhaps a greater warning sign to United that they should take greater care of their young talents. Anthony Martial has continually been linked with a move away from Old Trafford this season, with the Sun recently linking him with a potential move to Chelsea. United should surely use Depay as an example of how under appreciated talent can go elsewhere to prove their merit.

Depay hattrick for Lyon. United could really do with someone in his sort of form right now.

United should have never sold Memphis Depay, what a player

Can’t believe this is the Depay i saw at Manchester United….what a player? https://t.co/CCJpDOmXKj

Memphis Depay has been going off with Lyon, United fucked up by letting go of him so soon

United are stupid … sold Zaha and Depay for under £20m both worth 50+ now and are as good or better than what they currently have https://t.co/CpvYDE7Z3L

No player scored a hat trick for United this season and here we have Depay running riot in France. I’m just weak.?