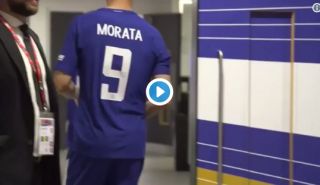 In a video captured from after the game, the Spain international can be heard shouting in Spanish.

While he may think he got away with it, some people have translated it and it’s clear Morata was using some very colourful language, to say the least.

Watch below as Morata shouts ‘¡Vamos ostia! ¡Que chupen pola!’ which roughly translates as: ‘F*** yeah! They can suck our d***s!’

Seems like Alvaro Morata enjoyed the victory yesterday, what he says translates to: “come on, let them suck cocks” ?? pic.twitter.com/HKr6AKBGWm

Way to be a gracious winner, Alvaro…