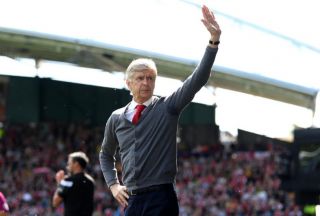 Arsenal have a hugely important decision to make this summer as they prepare to appoint Arsene Wenger’s successor ahead of next season.

As noted by BBC Sport last month, Wenger revealed his intention to step down at the end of the season to bring an end to his 22-year tenure at the Gunners.

That in turn gave the Arsenal hierarchy plenty of time to start planning for his departure, and to identify the ideal candidate for the job.

In order to give the new manager as much time as possible to settle in his new surroundings and stamp his mark on the squad, it would arguably be well advised for the north London outfit to make the appointment as soon as possible.

According to Spanish football expert and Sky Sports pundit Guillem Balague, as seen in his tweet below, he has claimed that former Paris Saint-Germain boss Unai Emery is in London for discussions with Arsenal and that would back the claim made by the Daily Mail on Monday morning about him coming into the fray.

The Spaniard is coming off the back of a domestic treble with the Parisian giants, but as noted by Sky Sports, he also confirmed his intention to leave last month as he couldn’t make a positive impact on PSG’s European ambitions.

Nevertheless, having enjoyed a successful stint in France off the back of winning three Europa League trophies with Sevilla, Emery certainly has the pedigree, winning track record and experience at the highest level to suit the job and the pressure that comes with it.

Conversely, The Mirror reported on Monday that former midfield ace Mikel Arteta could be announced as the new Arsenal boss this week, but on the basis of this latest reported update from Balague, it would suggest that the club are still talking with candidates and have not yet made their decision.

It’s one that they can’t afford to get wrong given Arsenal slipped out of the top four again this past season.

Unai Emery is in London to hold talks with Arsenal. Arteta is still a candidate. More soon on my YouTube channel